In 2012, I made the decision to attend graduate school at the University of North Carolina. A few weeks before my cross-country move, I was able to attend my brother Brent’s first speaking event in front of a parent support group. He had recently published his first book, Unintentional Humor®: Celebrating the Literal Mind and was sharing the lessons he had learned over the course of his life as a person on the autism spectrum. That night when I saw Brent on stage, I saw him find his calling. He was like a completely different person than the brother I had known all my life. I watched relief on the faces of the parents who had gathered there that night. Here was a young man on the spectrum—my own brother—shedding a positive and humorous light on living with autism.

Although I was in North Carolina for grad school, I kept reliving what I felt on the night I saw Brent speak. I couldn’t stop thinking – I want to start a nonprofit for young adults with disabilities. I want to help other people find that sense of purpose that I watched Brent find. There was, of course, one small problem, I had no idea how to start a nonprofit. However, in early 2013, after Brent’s keynote in front of over 600 people at the Autism Society of North Carolina’s Conference I was convinced: I was starting this organization.

Spoiler alert, I dropped out of grad school and the years since have been a crash course in entrepreneurship and grant applications, curriculum development, and workshops. What began as a feeling to do something, has developed into Celebrate EDU. A nonprofit organization dedicated to giving self-advocates with disabilities, like Brent, the tools they need to build a productive path forward in the world. For Brent, that path forward was Unintentional Humor® and the trajectory of self-employment my mom helped him find. For self-advocates with disabilities, that path begins with the tools and training in entrepreneurship that we offer at Celebrate EDU.  – Jenny Anderson 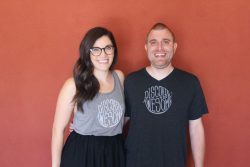